Just because we have them, doesn’t mean we have to keep them. The dictionary describes it as: Regret is a negative conscious and emotional reaction to personal past acts and behaviors. Regret is often expressed by the term “sorry.” That is encouraging to me because it reveals itself as consciousness and emotion, which we have control over. It also places it in the past, which we can choose not to live in anymore.

Some of you know, I spent a third of my life drowning in alcoholism. Early in my sobriety, I told a friend that I regretted all the years I lost to drinking, and wish I had them back. She quickly told me, “God was with you that whole time. Watching over you, protecting you, and allowing that experience to form you into the person you are today.” It’s true, and I wouldn’t have met her. One of my most treasured friends. 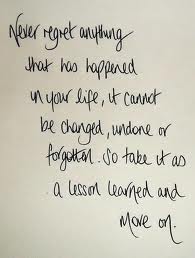 The most important thing to know is….We’re not alone. There are people out there who have done the same stupid things we did, if not worse, and are alive to tell about it. If you want to hear some, go sit in an AA meeting with a lot of newcomers. This is called a ‘Beginners’ meeting, and they usually have just a few hours sober. They are full of regret, and share snippets of things they did drunk, and are trying to accept sober. What’s interesting is almost everyone in the room will be nodding their head in agreement as their story unfolds. We can relate to their pain because we did something similar, if not the exact same thing!

Do you know who said it? The late, great Robin Williams. How can a man who brought so much joy to millions of people, live in darkness? I’m guessing he kept it hidden from the world, and it took his life. For me, that would be the ultimate Regret.